Bees, Wasps, and Hornets: this trio of flying insects can be some of the most troubling creatures to have flying around your home — or even sometimes inside of it. But with all of these insects flying around, sometimes it can be hard to tell the difference between the three, and even harder to know which you need to worry about and which is usually pretty much harmless. Over here at City Wide Exterminating, our experts have some of the answers; let’s break down how bees, wasps, and hornets are different from one another — and a little bit on how they’re the same. 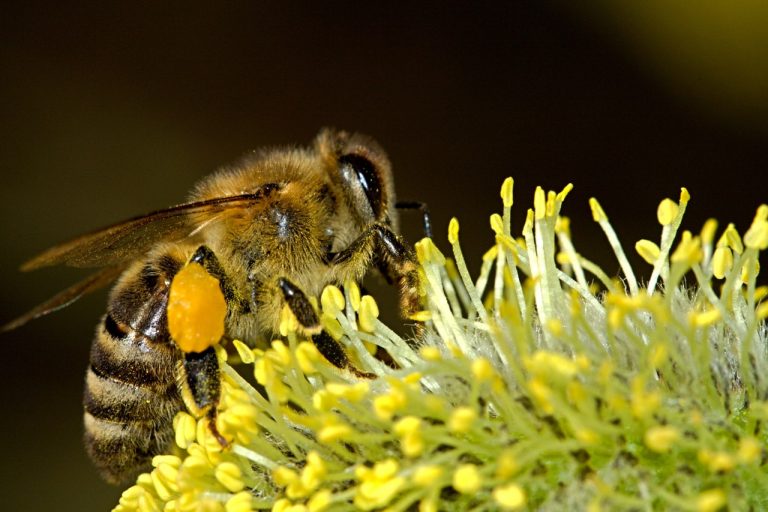 In the United States alone, there are over 4,000 species of bee (AKA as Anthophila); that giant number makes it a little bit difficult to boil down the behavior of bees into universal categories. Luckily there are a few things that can be said about bees that are applicable across the board, and that more importantly sets them distinctly apart from wasps and hornets.

Although as we said there are thousands of bee species, there are a few that are especially common here in North Carolina:

Sometimes known as chimney bees or simply miner bees, these bees are often confused with bumblebees because of their black and yellow coloring. They are a friendly, non-aggressive type of bee, usually not stinging or biting. They are what are called “solitary ground nesters”; in other words, they nest in the ground, and do not nest with colonies of other bees, and prefer instead to nest alone. They usually begin nesting in early spring.

Much like mining bees, cellophane bees (AKA polyester bee or plaster bee) are not aggressive, and nest in the ground. They get their unusual name because of their ability to build waterproof nests.

There are a number of different sweat bees in North Carolina, from metallic green and metallic blue to just plain old sweat bees. Sweat bees are incredibly important pollinators for both crops and wildflowers and are yet another species of bee that nests in soil. Sweat bees are not aggressive, but they will sting if disturbed.

Honey bees nest above ground, and are among the most prolific pollinators in the world, especially when it comes to agriculture. They are highly social, and while they won’t go out of their way to sting a person, if they do sting an entire swarm might attack because of a chemical released by honey bees after their fatal sting that alerts the colony of danger.

Bumblebees live in large underground colonies and are vital pollinators of plants. They are not at all an aggressive species, and will only sting if provoked.

Though they look very similar to bumblebees, carpenter bees couldn’t be more different from their more docile counterparts. While they aren’t big into stinging, carpenter bees will nest in wood- basically any wood that they can- which can mean trouble for homeowners.

Where You Can Find Bees

This varies from species to species, as we noted a bit in the above section. One thing to keep in mind is that despite the common understanding that bees are building a nest up in a tree, in a bush, or even somewhere on or inside of your home, the majority of bees (around 90%) are actually those ground bees, the kind that burrow and nest underneath the ground. However, honey bees do nest above ground, and carpenter bees nest in wood.

Bees can, on occasion, be aggressive toward humans, but that is usually only when their nests are being disturbed. While bee stings can be serious, especially for people who have bee sting allergies, bees are on the whole still much less aggressive than either wasps or hornets. One exception to this is the africanized bee (sometimes referred to as the killer bee), but luckily these very aggressive bees have not made their way as far north as North Carolina — yet.

How Much Do Bees Pollinate?

Bees specifically pollinate over 80% of the entirety of the world’s plants, including over 90 crops like apples, melons, cranberries, pumpkins, squash, broccoli, and almonds. 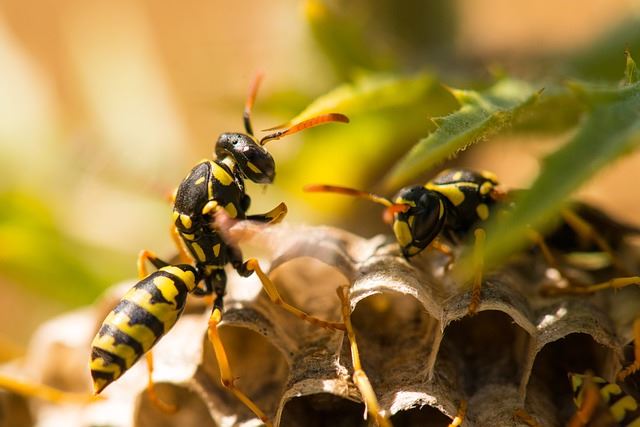 In the United States, there are 5 different types of wasp that you’re most likely to see out and about when the weather gets warm:

In North Carolina specifically, the eastern yellow jacket is the most common variation of this species of wasp. They can be aggressive swarmers when they feel that their nest is being threatened and because they can construct nests above ground, stumbling upon one simply by accident can be an innocent mistake with painful consequences. Yellowjackets are among the most aggressive types of stinging insects between bees, wasps, and hornets.

Paper wasps are another species of wasp that is often found on residential properties. They are best known for their umbrella-shaped nests that they will build on almost any surface that suits their needs, from twigs and branches of a tree to porch ceilings or window tops around your home. Like other wasps, they will attempt to sting if disturbed or threatened.

Red wasps are usually looking for locations that have lots of trees and/or flowers, and are especially fond of goldenrod plants. With nests that can contain over 800 wasps, a red wasp infestation can very quickly become a prominent issue. While they will sting when threatened, they are significantly less aggressive than yellowjackets.

Mud daubers are a type of wasp that construct their nests from pieces of mud. As wasps go they are not an aggressive type, and they share a commonality with solitary ground wasps: they do not live in colonies. They are probably the type of wasp that you need to worry the least about because of their strictly non-aggressive nature, but you should still be wary if you see one of their nests: mud dauber nests are often taken over by more aggressive wasp species, which can mean trouble for your property.

Where You Can Find Wasps

Although some wasps are solitary by nature, many of them build large nests that can house colonies of hundreds. These nests can be found on any horizontal structure, which can mean the branches of trees or bushes out in the yard, roof eaves, porch underbellies, and structure overhangs. Because wasps are typically more aggressive than bees, this can be an issue for any household during warmer seasons.

Although they are not as well-known as bees for their pollination habits, wasps are in fact important pollinators. They are less capable because they do not have the distinctive fuzzy hairs that bees do, but they still pollinate.

Why Wasps Are More Aggressive Than Bees

So we’ve discovered that many wasps are more aggressive than bees, but why? It seems this comes down to simple biology. In the late summer (when wasps become the most aggressive) the final offspring of a wasp colony’s queen have usually been born and left the nest to hibernate until next spring when they will build their own colonies. This leaves the wasps with no need to defend their nest or collect food for the wasp larvae, and that means they are only looking for their own food — namely sugary foods that us humans are often eating. If you pay attention you’ll notice that you’re dealing with a whole lot more wasps getting in your face in the late-summer months than in the earlier months, and that’s all thanks to biology. 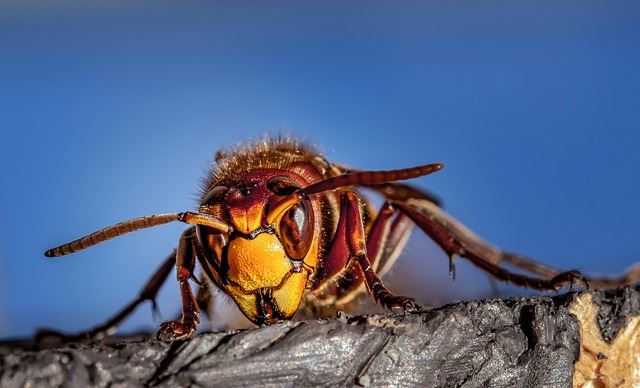 Hornets are actually a type of wasp

Fun fact: all hornets are wasps, but not all wasps or hornets. It’s sort of like that “all rhombi are a square” business.

So if a hornet is a wasp….how can it also be different from a wasp? Despite their relation, there are a few distinguishing characteristics that make a hornet a hornet. Usually when someone is referencing a hornet, they are referring to European hornets or bald-faced hornets, but fun fact: bald-faced hornets aren’t actually hornets at all — they’re just wasps. So let’s focus on European hornets.

European hornets share many similar features with yellow jackets- the brownish-red coloring, the yellow abdomens- but they are quite a bit larger, measuring 1 ½ inches compared to the yellow jackets comparably measly ½ inch.

European hornets will build nests in hollow trees, but they can also build nests in places more bothersome to humans, like wall voids, sheds, barns and attics. In other words, they tend to build their nests in relative isolation, which can mean problems for the humans who inhabit these structures.

European hornets are not as aggressive toward humans as their yellow jacket brothers, and in fact are rarely aggressive at all unless they are very directly in harm’s way, such as being grabbed or stepped on. However, they can behave aggressively and unpredictably when threatened or when hunting for food.

Speaking of food, one of the characteristics that really sets European hornets apart from both bees and wasps is that they are carnivorous — so much so that they will actually hunt and eat yellow jackets and honey bees.

Now that we know some of the ways we can tell these insects apart, it’s important to understand how we can actually prevent the worst they have to offer, namely in the way of stings. The CDC has a few helpful tips for preventing each of these insects from stinging:

KEEPING BEES, WASPS, AND HORNETS AWAY FROM YOUR HOME

Even if you take all the proper precautions to prevent a sting, that doesn’t mean you necessarily want stinging insects flying all around (or even inside of) your property. Luckily there are a few things that you can do to keep stinging insects away: