What Makes a Spider Dangerous?

For the purposes of this list, we are defining “dangerous” in terms of how poisonous the venom of a spider is when it is transmitted into a human via a bite.

The Three Most Poisonous Spiders in the United States

Brown recluse spiders are highly poisonous spiders, and there are 11 species of them that slink around North America. These creatures measure anywhere between ¼-¾ in length, with long legs and 6 eyes in 3 pairs (unlike most spiders, who have 8 eyes in 4 pairs). They have what is referred to as a “violin shape” on the cephalothorax- the portion of their bodies where their legs attach- and have either an abdomen that is either cream or brown-colored. Let’s check one out here, in contained action:

While they are one of the most poisonous spiders in North America, the truth is that their bites are not medically significant about 90% of the time; more serious bites that get really nasty like the one in the picture below are relatively rare, and can be safely treated.

However, if a bite is especially bad, the toxicity of the brown recluse venom can cause something called “necrosis”, which layman’s terms means “tissue death”. We’d show you a picture of a necrotic bite, but honestly it’s pretty disgusting stuff. Google “necrotic bite”, if you dare.

Black widow spiders have become one of the most notorious spiders in the world, likely because of their distinctive appearance and poisonous bite. Let’s take a look at one here: 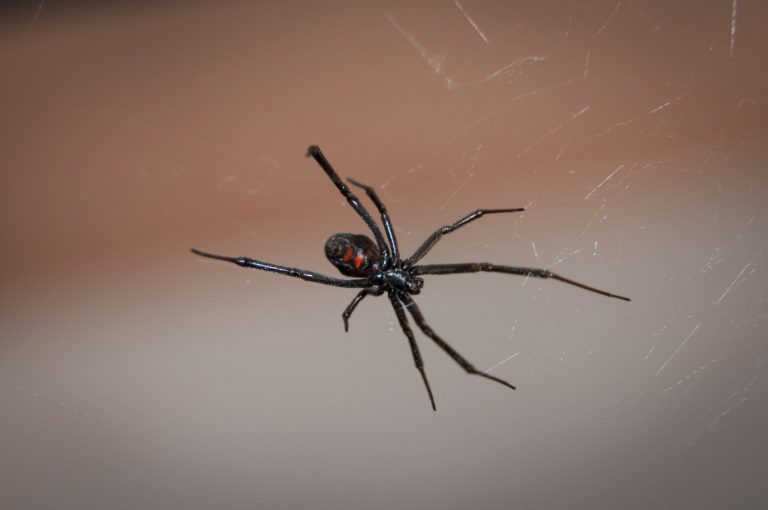 These spiders measure around 1 ½ inches long, which isn’t too tiny but also isn’t very large when you consider some of the biggest spiders in the world, but in those tiny frames they pack a venomous punch. They are most well known appearance-wise for their shiny black bodies and red, hourglass-shaped marking located on their abdomens.

But let’s get to the real question: can a black widow spider bite actually kill you? Well technically, yes — but it is exceedingly rare. Fatalities from a black widow spider bite are nearly always only reported in young children, the elderly, and those who are physically ill. Still, that isn’t a whole lot of consolation considering most of us probably have a young child or elderly person in our families and social circles, and even non-fatal bites can be painful and result in some truly uncomfortable symptoms like:

Hobo spiders are probably the least “famous” (can a spider be famous?) species of spider among the 3 poisonous spiders  in the U.S. They are primarily found in the Pacific-Northwest, so they aren’t as widespread of a problem as brown recluse or black widow spiders, but all the same they are venomous, and they can be aggressive. These fellas are between 1 and 1 ¾ inches in length, with a light-to-medium-brown coloration.

Interestingly, recent studies have shown that hobo spiders may actually not be as poisonous as previously thought. Their bites are thought to have been confused with our little friend the brown recluse spider from earlier, and bites have been found to only cause pain, redness, and some leg twitching. Still no necrosis or dangerously high blood pressure to be found here.

So of these 3 poisonous spiders (one of which we have actually now debunked) which ones can be found in North Carolina? Unfortunately, the Tar Heel State is saddled with both black widows and brown recluse spiders, which means it’s best to tread carefully if you’re rustling around secluded areas. Neither of these poisonous pests is aggressive, but they will bite if wherever they reside is being bothered.

Have you found yourself with a brown recluse or black widow problem? One option is to just try and ignore them (not ideal); your other option is to contact the professionals at City Wide Exterminating. We can help you get rid of any spider problem that you’re having — poisonous or otherwise. Just get in touch!